Since the first batch of Ben Holladay Bourbon was bottled earlier this year, the brand has only been distributed on the Holladay Distillery’s home turf of Missouri and Kansas. Ben Holladay Bourbon launched to a lot of excitement and acclaim, with a line of cars snaking down the lane on the first day of sales and a ton of great reviews from bourbon enthusiasts like Bourbon & Banter and Brian Haara’s Sipp’n Corn, leading to great consumer demand that we start selling it in other locations.  It has been a wild ride!

Now the Holladay Distillery is excited to announce that we’re already expanding our reach into a few other states, with more to follow in 2023.

One of the many cool things about Ben Holladay is that his empire spanned the entire country, so there are several states beyond our own that have their own interesting connections to his legacy.

Ben Holladay Bourbon is now available in Colorado, where the “Stagecoach King” was a significant presence. The city of Fort Collins was originally founded as Camp Collins, a military outpost set up to protect the stagecoaches and travelers heading West on the Overland Trail. There were at least one dozen of Holladay’s stage stations in Larimer County alone; there is a station still standing in Virginia Dale, as well as a station marker in LaPorte.

The Holladay Overland Mail and Express also had an office in Denver, and what is now Market Street was back then known as Holladay Street. We are very excited to share this piece of history, and now Ben Holladay Bourbon, with the state of Colorado! 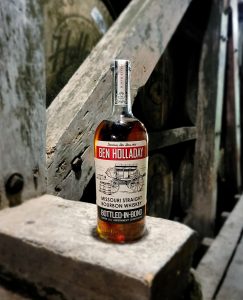 We also recently launched in Washington state. After Ben Holladay sold his stagecoach operation to Wells Fargo in 1866, he made his way to the Pacific Northwest to get into the railroad business, starting with the Oregon and California Railroad Company. Though his business interests were primarily in Oregon (which is where he died and is buried), there remains a Holladay Street in Seattle to this day.

A soft launch of Ben Holladay Bourbon is also underway in Iowa, Michigan, and Oregon. We’ll look forward to telling you more about Ben’s significant legacy in Oregon when we launch more widely in that state.

As always, we welcome guests to the Holladay Distillery to take a tour and learn more about Ben Holladay’s incredible history and to try Ben Holladay Bourbon yourself!

Who was Ben Holladay?

Ben Holladay is one of the greatest unknown figures in American history. Born in Kentucky, he moved to Weston, Missouri, as a teenager to seek his fame and fortune.

He became the original transportation tycoon, famed as the “Stagecoach King” for creating the Overland Express stagecoach lines that were ultimately sold to Wells Fargo, just one piece of a transportation portfolio that also included steamships, streetcars, and a railroad. He even owned the Pony Express for part of its brief history.

With everything from silver mines to saloons also under his domain, he was the largest individual employer in the US in the late 1800s and kept close counsel with everyone from President Lincoln to Brigham Young. He built an empire that spanned the entire country, and this distillery is the only piece left standing. Little did he know that whiskey would be the lasting legacy that carried the Holladay name well into the future.

Follow Holladay Distillery on social and we’ll keep you posted about any new states where we become available.