The short answer: Yes, absolutely! Bourbon can be made Outside of Kentucky. And we are very excited that the release of our own Real Missouri Bourbon is just over one month away. 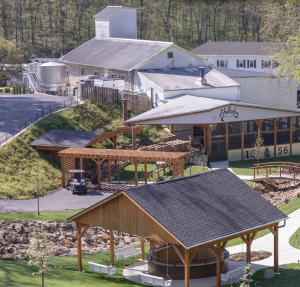 It is generally understood that the finest bourbon results from an ideal combination of climate and geology that is rare outside of Kentucky, which is why so much bourbon is made there. But there are other places that share these attributes, and Weston, Missouri, is one of them.

The Holladay Distillery sits on land with active limestone springs that were first charted by Lewis and Clark in 1804.

Limestone provides minerality and promotes fermentation, while also filtering out impurities and iron that can affect the spirit’s color and taste. The Midwestern climate of dry and cold winters with hot and humid summers result in variations in temperature that are ideal for aging bourbon. 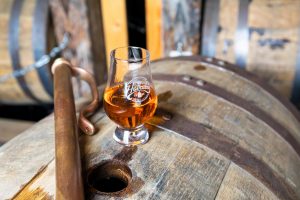 Our bourbon barrels age in two historic rickhouses called ironclads that are not climate controlled, allowing the temperature to vary by as much as thirty degrees between the top and bottom floors.

Missouri recently joined the ranks of Kentucky and Tennessee by passing a law that established specific rules for its unique style of whiskey.

Mo. Rev. Stat. § 311.025 took effect in August 2019, requiring that any whiskey labeled as Missouri Bourbon must not only meet the federal standards for bourbon, but also be mashed, fermented, distilled, aged and bottled in the state; aged in oak barrels manufactured in the state; and—beginning January 1, 2020—made with corn exclusively grown in the state.

Ben Holladay Missouri Straight Bourbon Whiskey meets all of these requirements and we are proud to call it Real Missouri Bourbon!

**Ben Holladay Bourbon is Bottled-in-Bond, a designation that signals the highest level of authenticity and adherence to rigorous distilling standards.