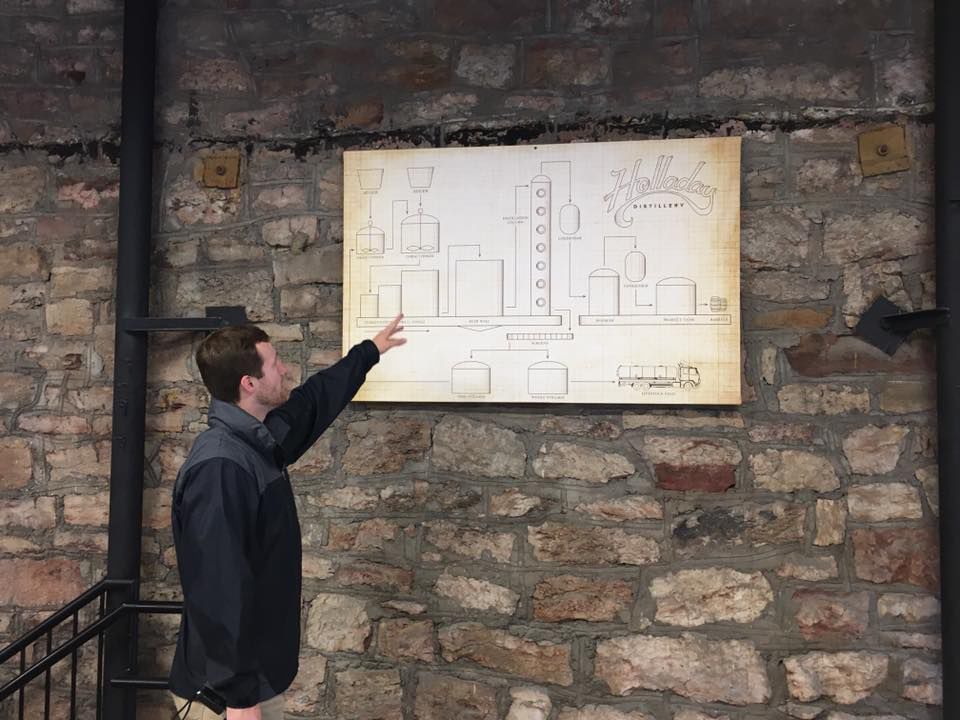 In this age of newly minted whiskey distilleries, McCormick Distilling Co. is something of an anomaly. While its bourbon operation looks new — the first barrels were filled six months ago — this is just the latest chapter of a 160-year-old story.

The tale begins with McCormick’s founding on what was then the American frontier. It winds through Prohibition, when production of medicinal whiskey kept the company afloat, and takes a global turn with the addition of vodka, tequila, rum and other spirits.

Most were produced elsewhere, but bourbon continued to flow from McCormick’s Weston headquarters until 1984, when the original distillery was shuttered.

The move made sense at the time, but the times have changed. Demand for bourbon exploded, and McCormick realized it possessed an unusual asset.

“We have such a tremendous Missouri bourbon heritage, one that nobody else had and was sitting there unused,” says Mick Harris, McCormick’s president and managing director.

So the company restored its distillery and began making bourbon. When it’s released in about three years, the whiskey will join a list of premium spirits that includes Broker’s Gin (a brand of London dry gin made near Birmingham, England, that McCormick purchased in 2015), 360 Vodka, Tequila Rose and others.

While the company remains committed to the roster of value brands it’s known for, its push toward premium is strategic, Harris says.

“Consumers have made a move toward premium spirits,” he says. “You see it in every aspect of the food and beverage industry. Consumers want to know where everything is produced, and they’re willing to pay a little more for it.”

They want to see it made, too, which is why McCormick is offering tours for the first time in two decades. Certainly it’s a picturesque spot, nestled in the rolling hills of northwest Missouri and flanked by Weston Bend State Park.

The welcome center, a 1950s-era red brick house renovated for the purpose, overlooks the 145-acre property and serves as the starting point for tours. The center also offers a gift shop, tasting room and a display showcasing historical bottles and the once-popular decorative decanters depicting Elvis and other icons.

But McCormick was a distillery long before The King came along. Meriwether Lewis and William Clark are said to have discovered limestone springs when they passed through the area, and by 1839, a meat-packing plant had opened on the site to take advantage of the water.

Ben Holladay and his brother, Maj. David Holladay, in 1856 converted the property into the Holladay Distillery, the same name McCormick’s revived for its bourbon operation. According to the Holladay website, Ben Holladay owned saloons, hotels, silver mines, the stagecoach line that became the Wells Fargo Express, as well as the Pony Express, which he purchased in 1862. By 1864, he was the largest individual employer in the United States, the website says.

The distillery changed hands over the years, eventually taking (and keeping) the McCormick name. A group of investors including the Pechar and Griesser families bought McCormick in 1993; its owners are still family members or employees.

Harris has worked for McCormick since 1991. During my visit in April, he walked me through the “cave” built into the hillside that once stored meat but now makes the perfect spot for tour-goers to watch a video about the company. There’s a covered pavilion for events and a path that winds past flower beds toward metal-sheathed warehouses where whiskey barrels are stored.

The silvery color of the buildings reflects the sunlight, Harris says, and cools the buildings in summer. Shutters can be opened to the breeze or closed against the elements, helping control the environmental conditions that influence a whiskey’s development as it ages.

“The whiskey-aging process in a barrel warehouse is all about temperature changes,” Harris says.

Inside, it looks much the same as other warehouses I’ve visited, with evenly spaced wooden racks capable of supporting thousands of barrels of whiskey. Back down the path, though, was something I’d never encountered: a cistern that supplies water to the whiskey still.

It’s 35 feet deep (surrounded by a wooden fence and covered by a roof) and was dug by hand out of solid rock back in the 1800s, Harris says. Water from surrounding springs trickles in, and with a total capacity of more than 40,000 gallons, there’s little risk of McCormick running short of the 5,000 gallons it needs for daily distilling runs.

“Limestone water is crucial for making bourbon whiskey, and it’s just flowing out of the ground here,” Harris says. “The entire reason there’s a distillery on this site is water.”

The interior of the vintage building that houses the distillery itself has been entirely rebuilt and its equipment replaced. Harris won’t say how much the updates cost, only that McCormick has invested $20 million in its overall business in 2015 and 2016.

The new equipment matches the old footprint, including the two cookers (otherwise known as mash tuns), where grain is combined with water and heated so the starches will break down into sugars. One cooker is for large grains like corn and other for smaller grains. Large and small are cooked separately, then combined.

The distillery has three open-top fermenters, where added yeast begins converting sugars into alcohol. Then the liquid goes into a still made by Vendome Copper & Brass Works that, like everything else, mimics the original with a vertical column (for initial distillation) and a doubler (where a second distillation takes place).

For McCormick’s bourbon revival, the company looked to the past for a recipe.

“We actually have several cases of the last production year, plus all the formulas, cooking temperatures, yeasts and that sort of thing,” Harris says.

The result is a sour mash bourbon, meaning a bit of mash from an older batch is added to newer ones to help kick-start fermentation, made from 73 percent corn, 15 percent rye and 12 percent malted barley. After aging at least three years, the bourbon will be released as McCormick Gold Label.

“We liked the taste of what they were producing here,” says Mark Kocour, McCormick’s quality manager and master distiller. “We have a longstanding history here, and we just want to do things the same way.”

McCormick will make a 2-year-old corn whiskey, a 5- to 6-year-old wheat bourbon that will be sold under the Holladay Distillery label, longer-aged whiskeys and “single barrels, and small-batch whiskeys, and all kinds of experimental little things,” Harris says.

Once matured, the whiskeys will all be bottled on-site in what Harris refers to as the bottle shop. McCormick invested $10 million in the facility in 2012, and it now has five automated bottling lines and two for hand-bottled products like the jugs of Platte County Moonshine.

Watching the bottles glide by gives visitors a sense of McCormick’s scale. Indeed, the company sells 4 million cases of spirits and liqueurs and has distribution in 50 states and 68 countries. Tequila Rose is especially popular in Thailand and Kenya, Harris says.

But its bourbon, produced on-site in the Holladay Distillery, is truly a taste of Missouri that will endure regardless of trends, Harris says.

“This is real Missouri bourbon. Everything we’re doing here is real,” he says. “In good times and bad, there’s demand for good whiskey.”