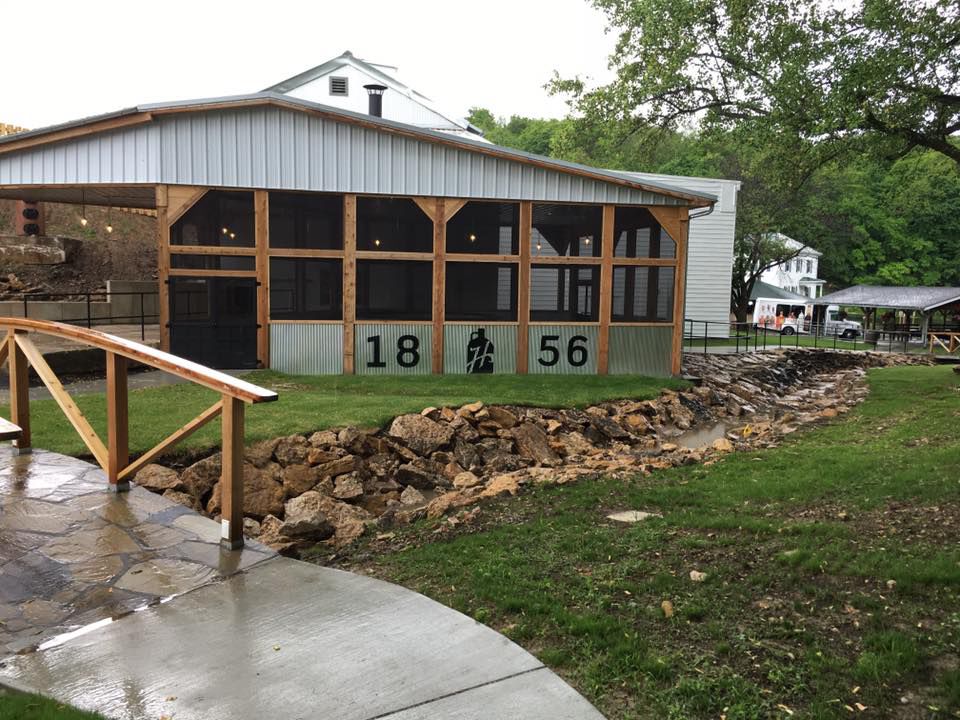 McCormick Distilling Co. stopped making bourbon for 30 years at its Weston plant, but in March it fired up the original Holladay Distillery and got to work putting its first batch of 160-year old, original recipe, Holladay 1856 bourbon into oak barrels.

Although you can’t taste the historic Holladay 1856 bourbon yet – it needs to age for the next three to four years – you can tour the distillery now and watch how it is being made.

Holladay Distillery is one of the country’s oldest distilleries west of the Mississippi that is still operating in its original location. Owned by McCormick Distilling Co., the Holladay Distillery opened in 1856 and even stayed open during Prohibition, when it was allowed to operate for “medicinal purposes” only.
After a 20-year hiatus, McCormick has reopened its scenic distillery to host public tours that quietly started in April. Guests begin their tour at the brick farmhouse at the top of the property, which features a tasting bar, historic artifacts, timeline and gift shop. A bus will then transport guests down to where McCormick is distilling and aging Holladay 1856 bourbon in the original buildings used over 30 years ago.

“Heritage is the best reason we have to be making bourbon again,” said McCormick president Mick Harris. “We never should have stopped making it.”

A tour of this national historic landmark starts with a short video shown inside one of the original buildings on the property called the Ancient Cave, where bourbon barrels were aged. The video walks you through 160 years of distilling history, from the very beginning with founder Ben Holladay to today’s large-scale and state-of-the-art bottling line and distilling process.
A true highlight is to be able to look down into the original limestone, hand-dug well, which is filled from several natural limestone springs that run through the property.

A large cement slab had to be removed from the well, which measures 15 feet wide and 35 feet deep. It was completely drained before it was allowed to refill naturally with 45,000 gallons of water, ready for production.

“I thought it was important in our planning of the tour to uncover the well to allow people to see where the whole process starts for us,” Harris says. “The natural limestone water is important in the bourbon-making process because it removes iron from the water, which is the enemy of great-tasting bourbon.”
A walk up a stretch of stairs to the second floor of the building leads guests to the actual bourbon production facility. After a 30-year hiatus, all of the distilling equipment in the facility was replaced with brand-new, state-of-the-art equipment, including a beautiful copper still.

Guests are encouraged to taste the mash straight from the tanks after 24 hours of fermentation, when it is bubbling away, and after 48 hours, when it is quieter and has a sour taste to it, as it continues to work its way toward bourbon.

From there, guests walk to the original aging warehouse and see the first barrels of Holladay 1856 Bourbon that were put on the shelves in March. The warehouse can hold up to 12,000 barrels of bourbon in the form of 55-gallon new oak barrels that are charred to create depth and flavor. They source the barrels from the Independent Stave Co. in Lebanon, Missouri.

“There is so much interest in locally produced, authentic products, and that is exactly what Holladay 1856 is,” Harris says. “People care about what they put in their bodies, and the same is true for the bourbon in their glass.”

Tours are offered seven days a week and guests are able to book online at the Holladay Distillery website. The cost of the tour is $10 per person. You must be 21 or older to participate in the tasting portion of the tour, which currently includes drinks made with other McCormick brands including 360 Vodka, Tequila Rose and, one day, Holladay 1856 Bourbon.